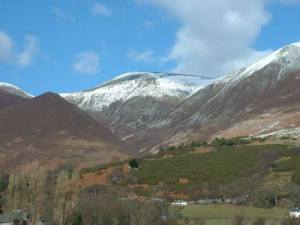 (The Summit of Skiddaw above the parish).

The parish is a rural area roughly enclosed by the Skiddaw massif to the North, the River Glenderaterra to the east, the River Greta to the South and the River Derwent and Bassenthwaite Lake to the West. It consists of three small centres of population- Thrushwood, Millbeck and Applethwaite and several small clusters of houses and farms. The total population in the 2011 census was 264 people. The photo below was taken in the Millennium Year. 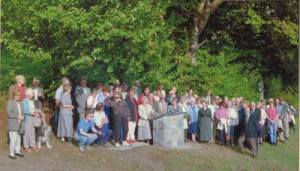 It is an area of spectacular scenery dominated by Skiddaw which at over 3000ft is one of the highest mountains in the Lake District. The area has an abundance of wildlife, with red squirrels frequently seen on the lower, wooded slopes of Skiddaw. The parish is also close to the osprey nesting site near Bassenthwaite Lake.

It seems likely that the parish of Underskiddaw has always been an area of small farms. Many of the hamlet and field names are Norse in origin.

Both Applethwaite and Millbeck still have the remains of old corn mills and later each had a flourishing woollen mill. Applethwaite Ghyll was the site of slate quarrying. There was a modest amount of mining, with a barytes mine above Millbeck and also a small lead mine on Dodd. 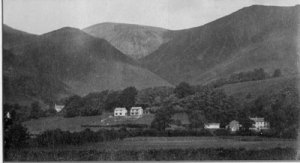 (An old view of the parish)

The building of the Church Room in 1829, the presence of a school for younger children at Dancing Beck from 1875 to 1920 and the building of the Village Hall in 1896 have all added greatly to the character and development of the parish. 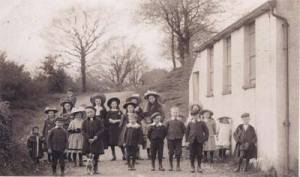 Children outside the Church Room (circa 1900)

Apart from the building of some newer houses and the changes to farming practices in recent times the parish looks very much the same today as it did in the nineteenth century. 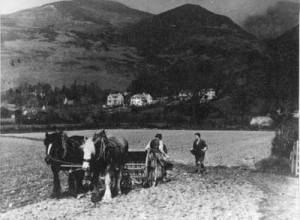 Farming in an earlier time.